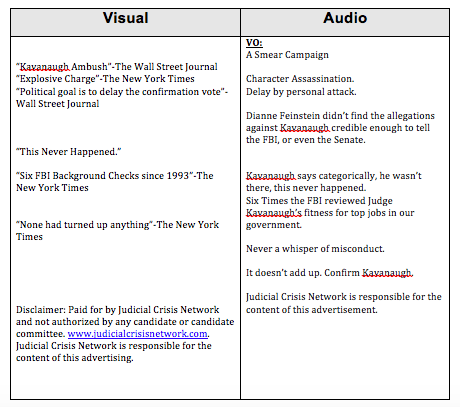 WASHINGTON – The Judicial Crisis Network is launching a $600,000 national cable ad buy featuring  “Kavanaugh in His Own Words,” that will air for two weeks across CNN, MSNBC and FOX News Channel starting Thursday, September 6th.

“We’re tired of the Democrat carnival. It is time for the American people to meet Judge Kavanaugh for themselves — here he is in his own words.”

“After two long days of Democrat histrionics and extremism, Judge Kavanaugh demonstrated that he has the temperament, humility, and independence to sit on the U.S. Supreme Court.  Despite endless demands by Democrats that he act like a politician, Judge Kavanaugh repeatedly demonstrated that he has a record of being a fair and independent judge who will adhere to the Constitution.

Senators Manchin, Heitkamp, Donnelly and other red state Democrats should distance themselves from this extremist behavior. There is no reason to wait. They should buck the extremist wing of their Party and announce they are voting to confirm Judge Kavanaugh.” – Judicial Crisis Network’s Chief Counsel and Policy Director, Carrie Severino

Judicial Crisis Network’s Chief Counsel and Policy Director, Carrie Severino responded to the first day of confirmation hearings for Judge Brett Kavanaugh to become the next Supreme Court Justice. “Democrats turned today’s confirmation hearing into mob rule because they have nothing on Judge Kavanaugh. As he made clear in his opening remarks, and as he has demonstrated throughout his career, Judge Kavanaugh is a highly qualified nominee and a mainstream judge who follows the law and adheres to the Constitution. And that’s why Democrats are so frustrated and hysterical.”

“Democrats have already announced that they oppose him, so this claim that they need more time or more documents is nothing more than a show, a fishing expedition designed to obstruct and create gridlock.  Judge Kavanaugh has been endorsed by leading figures on the right and the left. He is a mainstream nominee who will base his decisions on the law and the Constitution.”

Judge Kavanaugh has been on the DC Circuit Court of Appeals for 12 years. He has issued 307 opinions and joined hundreds more.  He has a comprehensive record of jurisprudence that has been in the public domain for years.

The Judiciary Committee has reviewed hundreds of thousands of documents—more than were submitted for both Justice Gorsuch and Justice Kagan.

Documents submitted to the Senate Judiciary Committee pertaining to Judge Kavanaugh’s time serving in the White House Counsel’s and Independent Counsel’s offices are the largest number of executive branch records ever submitted to the Committee for a Supreme Court nominee.

The Kavanaugh nomination has been the most transparent nomination process in history. During the presidential campaign, President Trump publicized a list of extraordinarily qualified individuals he said he would choose from to fill Supreme Court vacancies.  Judge Kavanaugh has been on that list since November of 2017.