JCN conducted a poll in West Virginia in the past week:
Overall, West Virginians want Judge Brett Kavanaugh confirmed by a margin of 58% – 28% 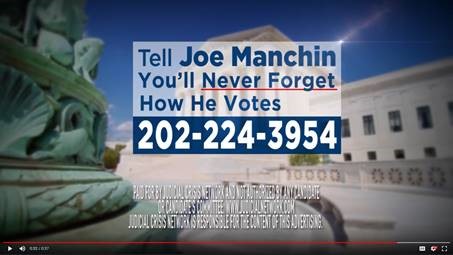 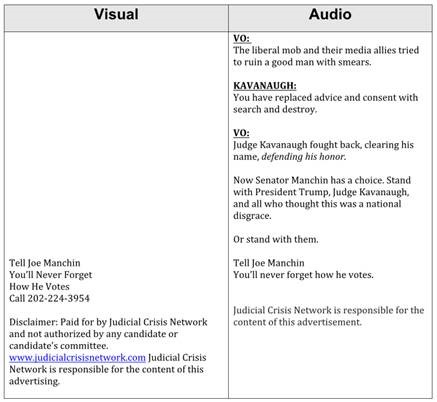 “This has all the indicators of an 11th hour character assassination and a desperate attempt to delay and defeat the nomination of Judge Kavanaugh, who has a sterling reputation in his community, his profession, his church and among hundreds of friends, colleagues and co-workers. Judge Kavanaugh submitted a questionnaire of over 17,000 pages, participated in two full days of public Senate hearings as well as a private session to discuss his background, and then he answered an additional 1,200 follow-up questions. We look forward to his prompt confirmation to the Supreme Court.”

Judge Kavanaugh does not hire ideologically — he hires women in record number regardless of their points of view. His former female law clerks, coming from diverse ideological persuasions, enthusiastically support Judge Kavanaugh’s nomination, not in spite of his position on women, but because of his advocacy for women.

Is there anything sadder than the sight of progressives solemnly going through their borking rituals when nobody cares? That’s what happened Sunday, when activists sought to mobilize the public to keep Brett Kavanaugh off the Supreme Court.

… ” But it barely registered a blip. All that sound and fury signifying one thing: They don’t have the votes.

Carrie Severino, Judicial Crisis Network’s Chief Counsel and Policy Director:
“Democrats have already announced that they oppose him, so this claim that they need more time or more documents is nothing more than a show, a fishing expedition designed to obstruct and create gridlock.  Judge Kavanaugh has been endorsed by leading figures on the right and the left. He is a mainstream nominee who will base his decisions on the law and the Constitution.”

Ed Meese, Attorney General for President Reagan:
“I’m happy to hear that Judge Brett Kavanaugh’s confirmation hearing will begin soon. Senator Grassley has given senators more than enough time to evaluate the nominee—more time than Senator Leahy, his predecessor, provided senators to consider Justices Kagan and Sotomayor. Senators also have enough information about Judge Kavanaugh to realize what an outstanding justice he would be. He wrote more than 300 opinions during his twelve years on the DC Circuit Court of Appeals, and more documents have been made available to senators than was the case for both Justice Kagan and Justice Gorsuch. Even the material for review from Judge Kavanaugh’s days in the executive branch is the most in nomination history.

“Democratic senators have the time and they have the material. They have no excuse to obstruct his prompt confirmation.”

“Chairman Grassley deserves praise for moving this process forward in a measured, yet expeditious, manner. The White House has made available far more documents from Judge Kavanaugh’s executive branch service than were ever produced for any other Supreme Court nominee, including the emails he sent during his time as associate counsel to the president, which total more than 200,000 pages. Likewise, Judge Kavanaugh’s questionnaire was the most comprehensive in scope in the history of the Senate Judiciary Committee. The documents that went through his Staff Secretary process to the Oval Office are irrelevant to the nomination and deserve the same protection afforded Justice Kagan’s papers at the Solicitor General’s office.”

Jenny Beth Martin, Tea Party Patriots Citizens Fund Chairman:
“Today Senator Chuck Grassley has kept a promise to the American people by setting timely dates for the confirmation hearings of Supreme Court Justice nominee Brett Kavanaugh.  We fully support Chairman Grassley’s decision to advance the process of confirming this very qualified nominee. Liberal Democrats don’t need more time to review Judge Kavanaugh’s record, they just don’t like the fact that his record shows he is fair, independent and adheres to the Constitution, so they are now resorting to obstruction and gridlock to extend their fishing expedition.  The Democrats’ complaints ring hollow given how they’ve obstructed virtually every effort to effectively govern since President Trump took office.  These actions not only attack the confirmation process but insult the American people who deserve to have a fair and independent judge who will honor the Constitution and the rule of law. We look forward to the hearings in September and a prompt confirmation so Judge Kavanaugh can take his seat on the Supreme Court when it convenes in early October.”
Penny Nance, CEO and President of Concerned Women for America:
“We applaud Senator Chuck Grassley for swiftly moving along Judge Kavanaugh’s confirmation hearings so the Supreme Court seat vacated by Anthony Kennedy can be filled quickly. Concerned Women for America’s ‘Women for Kavanaugh’ six state bus tour spent time this week at Senator Grassley’s townhalls in Iowa, and we saw how enthusiastic Americans – especially women – are about Judge Kavanaugh’s nomination.“While those on the left will cry that the timing is short, Judge Kavanaugh’s name was listed last November on President Trump’s short list of possible nominees if a Supreme Court vacancy should occur. They have had additional months over the summer to gather documents, read cases, and interview Judge Kavanaugh himself. And just because it’s an election year, it does not mean that Judge Kavanaugh cannot – or should not – be confirmed. There have been at least four Justices nominated and confirmed in midterm election years.

“It’s time for the public to hear from President Trump’s nominee and learn first-hand just how well-qualified he is to hold the position of a U.S. Supreme Court Justice.”

Tim Chapman, Executive Director of Heritage Action:
“Judge Kavanaugh is a supremely qualified candidate who is widely respected by his colleagues on the bench and will, based on this record, faithfully uphold the Constitution and interpret the law as-written. Senate Democrats opposed the nomination of Judge Kavanaugh to the Supreme Court even before President Trump made the announcement, and preceded to obstruct the process for as long as possible. It’s time Senate Democrats end their charade and give his nomination the seriousness it deserves.”

Ken Blackwell, President, The Mason Center:
“The same Democrats who long ago said they would never vote to confirm Judge Kavanaugh are now saying they need more time and material for deliberation. But Judge Kavanaugh wrote 307 opinions while on the DC Circuit Court of Appeals and submitted the most comprehensive questionnaire the Judiciary Committee has ever seen—and they’ll have more time to review this material than they had for Justices Kagan and Gorsuch. Good for Senator Grassley, who knows what their game and won’t play along.”

Jamil N. Jaffer, Founder, National Security Institute:
“Chairman Grassley is exactly right to schedule hearings on Judge Brett Kavanaugh’s nomination to the Supreme Court as soon as possible in September. This timeframe puts Judge Kavanaugh’s hearing right in the heartland of where other nominees to the high court—from Presidents of both parties—have been, if not actually a bit further out.”

“In addition, the claim that the Senate needs more documents to evaluate Judge Kavanaugh’s nomination is ludicrous. Judge Kavanaugh has been on the bench for well over a decade and has authored over 300 opinions, providing the single best source of information of the kind of Justice he would be if confirmed. Putting that to one side, the Senate has already received more documents than have ever been produced for any nominee to the Supreme Court, and is expected to receive more than five times the number of pages provided by the next closest nominee, with Judge Kavanugh’s records expected take up nearly 900,000 pages.”

“The idea that the Senate should get every piece of paper that might have passed Judge Kavanugh’s desk when he was the Staff Secretary to the President is a time-wasting canard designed to ensure that Judge Kavanaugh doesn’t get in the next two years, and is a demand being made by a number of Senators who have already said they won’t vote for Judge Kavanaugh under any circumstances.”

Gayle Trotter, JCN Spokesperson:
“Senator Grassley recognizes the stalling tactics of Democratic senators and has wisely scheduled a hearing for Judge Kavanaugh. The nominee’s record is clear: he has written more than 300 opinions during his 12 years on the DC Circuit Court of Appeals and the Judiciary Committee has reviewed hundreds of thousands of documents about him. Senator Grassley has given senators more time to evaluate the nominee confirmation than former Senate Judiciary Committee Chairman Patrick Leahy allotted for Justices Sotomayor and Kagan. It’s time for the Senate to confirm Kavanaugh and deliver another great justice.”

“Democrats have already announced that they oppose him, so this claim that they need more time or more documents is nothing more than a show, a fishing expedition designed to obstruct and create gridlock.  Judge Kavanaugh has been endorsed by leading figures on the right and the left. He is a mainstream nominee who will base his decisions on the law and the Constitution.”

Judge Kavanaugh has been on the DC Circuit Court of Appeals for 12 years. He has issued 307 opinions and joined hundreds more.  He has a comprehensive record of jurisprudence that has been in the public domain for years.

The Judiciary Committee has reviewed hundreds of thousands of documents—more than were submitted for both Justice Gorsuch and Justice Kagan.

Documents submitted to the Senate Judiciary Committee pertaining to Judge Kavanaugh’s time serving in the White House Counsel’s and Independent Counsel’s offices are the largest number of executive branch records ever submitted to the Committee for a Supreme Court nominee.

The Kavanaugh nomination has been the most transparent nomination process in history. During the presidential campaign, President Trump publicized a list of extraordinarily qualified individuals he said he would choose from to fill Supreme Court vacancies.  Judge Kavanaugh has been on that list since November of 2017.